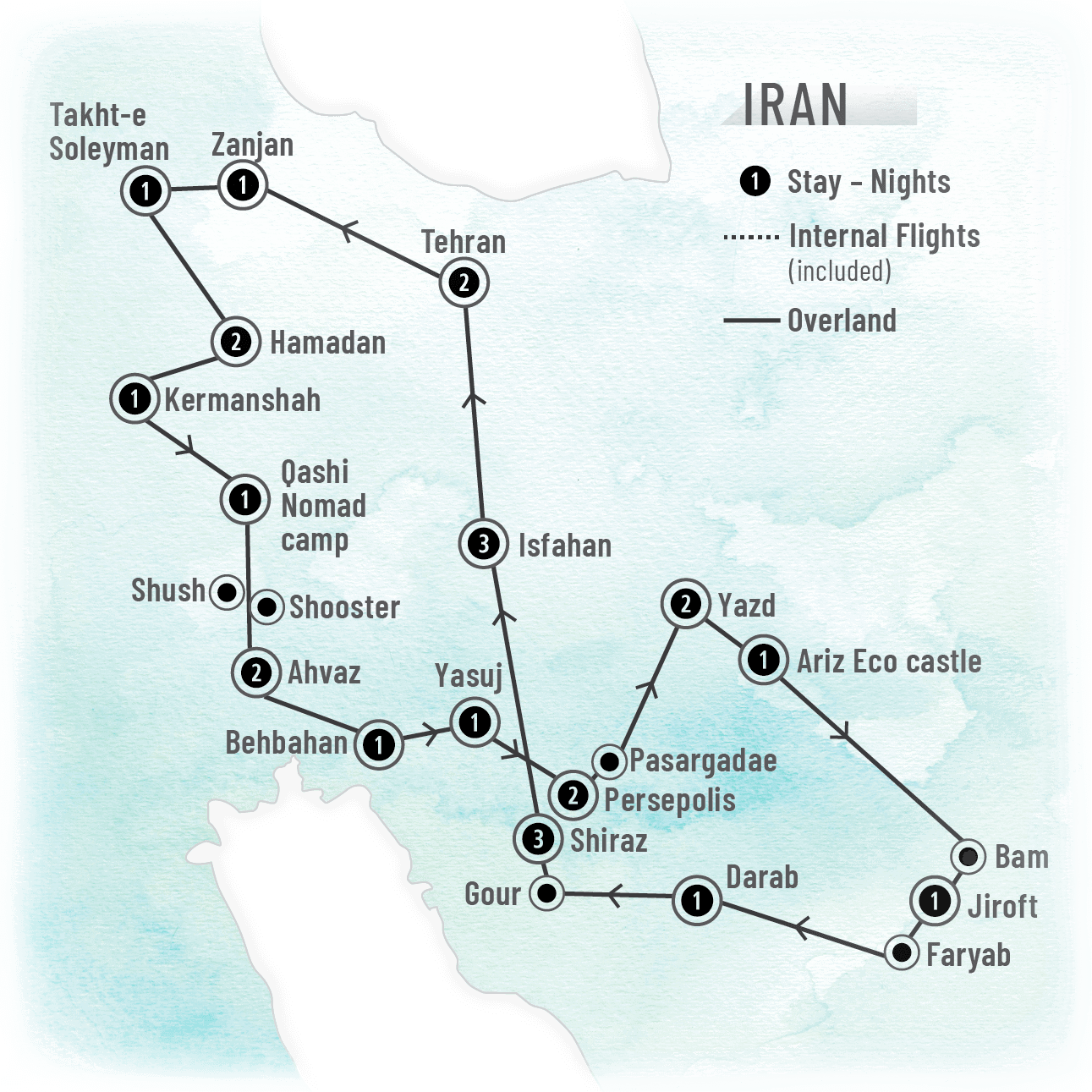 A reasonable level of fitness and good health is required to participate. You will need to be able to walk for a few hours at a gentle pace, remain standing in museums and historic sites and get on and off transport by yourself.

Typically, we have a mix of passengers from many countries

What are you doing as a company to reduce the use of plastics on tour?

Yes, local guides on this tour are English speaking

Yes, we can assist with pre and post tour accommodation

Yes, there is free time to explore places during the tour

Yes, you will know the names and details of all the accommodation before you depart

Yes there is a single supplement for solo travellers

Yes, domestic flights are included, but not international flights

No, the minimum age for this tour is 18 years of age

Tipping is included in the tour price, including tipping for local guides, drivers, hotel staff and restaurants for included meals

Yes, the transport is air conditioned throughout

Yes, all entrance fees are included

Yes, the transport is air-conditioned throughout

Yes, Dr John Tidmarsh, a renowned archaeologists with decades of experience in Iran, will be acting as our Expedition Leader/Storyteller and there will also be an English-speaking local guide throughout.

A reasonable level of fitness and good health is required to participate. You will need to be able to walk for a few hours at a gentle pace, remain standing in museums and historic sites and geet on and off transport by yourself.

Yes, this trip is available to be booked instantly

Luxury accommodation throughout, one family homestays and one overnight in nomad camp

Yes, our accommodation is fully audited to ensure they comply with the very highest health and safety regulations.

Arcadia Expeditions has been trading since May 2019.

No you cannot join the tour once it has departed

How many people are in a group?

Our expeditions have a maximum group size of either 10, 12 or 16 travellers. Small groups of like-minded travellers allow low-impact, intimate access to our destinations and more time with our experts. Each member of our group will be an integral part of the expedition, with our small group size allowing us to learn more about our traveller’s interests and incorporating them into the experience.

At Arcadia Expeditions, we believe that our business has a higher purpose than simply profit. As leaders in the travel industry, we incorporate principles of Sustainability and Responsible Tourism into everything we do. We are committed to reducing our negative environmental impacts while increasing our positive social and economic impacts and work with a number of grassroots projects globally.

Who will be leading my tour?

Each expedition has a leadership team of two: an expert on the trip theme to narrate the story of the journey (an academic, author or researcher) plus a local guide who shares their local knowledge, culture and experience to reveal the spirit of their country. They are the ultimate travel companions and are trained to make every part of the trip safe and seamless.

You are able to transfer from one of our expeditions to another free of charge 60 days or more from departure. Should you be unable to find a suitable alternative with us immediately, you can retain the value of your deposit as a credit for up to 24 months.

You will receive an extensive 'Essential Trip Information' set of notes to give you a detailed background on the destinations you are traveling to with us. This incorporates information on climate, a packing list, reading list, visa information and other tips and facts so you make the most of your holiday.

Can these tours be run privately for my own group?

Travelling privately, rather than on one of our set group departures, gives you the chance to tailor-make the content of your expedition for groups of family or friends. Choose activity inclusions on your trip, the duration and the departure date. We offer complete flexibility that puts you in control of your holiday.

We have introduced a range of enhanced safety measures in line with recommendations from public health authorities, the World Health Organisation (WHO) and following the Adventure Travel Trade Association (ATTA) Covid-19 protocols for cultural tour operators.

Groups will most likely be a mix of nationalities. Our small groups of like-minded travellers share a common interest in the chance to go deeper in to a destination and for the art of storytelling. Our travellers come from the same vintage and you will feel like you are part of a travelling dinner party with new friends.