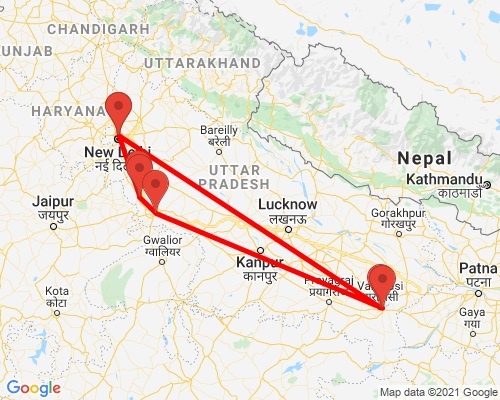 USD, EURO, GBP, JPY, CNY, RMB, SGD, CAD, AUD are accepted at most of the tourist shops. These currencies can easily be changed into local currency INR from money changer at the airport, in cities, and at hotels.

You have to apply for Indian Visa yourself. https://indianvisaonline.gov.in/

Most of the hotels offer free Wi-Fi.

Yes, after the sightseeing you will be having time to explore the city and places of your interest. Our driver and transport will remain on disposal at your service. We expect you will release the driver before 8 pm so that he is having ample time to sleep and report on time to your next day duty.

No. You have to apply for Indian Visa yourself. TOURIST VISA is mandatory for Foreign Nationals to travel India.

Domestic flights generally provide 15 kg checked-in baggage and 7 kg hand baggage. We provide vehicle which could accommodate 1 big and 1 handbag easily per person. There is no baggage limit set by us. Traveling with less baggage is always comfortable and recommended.

Yes, entrances to all monuments and activities charges mentioned in the itinerary are well included in the price

We operate private tours only and guarantee 100% departure. If group members reduced, we will recalculate the price and apply the lowest supplement only if it's increasing our operation cost.

Yes, we can assist and arrange pre or post-tour accommodation.

Can you provide other than English language guide?

Yes, we will provide all details well in advance before the tour

Will passengers be provided assistance at airport?

Our office representative will receive the guest with the lead passenger name paging board. And

Yes, Visa is require for any foreigner entering India.

Recommended tipping is 5 to 10% of total tour values. It's always optional and depends on the traveler's wish.

No. Neither international nor domestic flight tickets are included in the package price. We can book the flight at supplement best available cost.

No. We provide a local English-speaking tour guide in each city. Accompanying tour escort can be booked at a supplement cost

Yes. On request and at supplement cost, we can provide another language (German, French, Russian, Spanish, Italian guide) subject to availability in that cities.