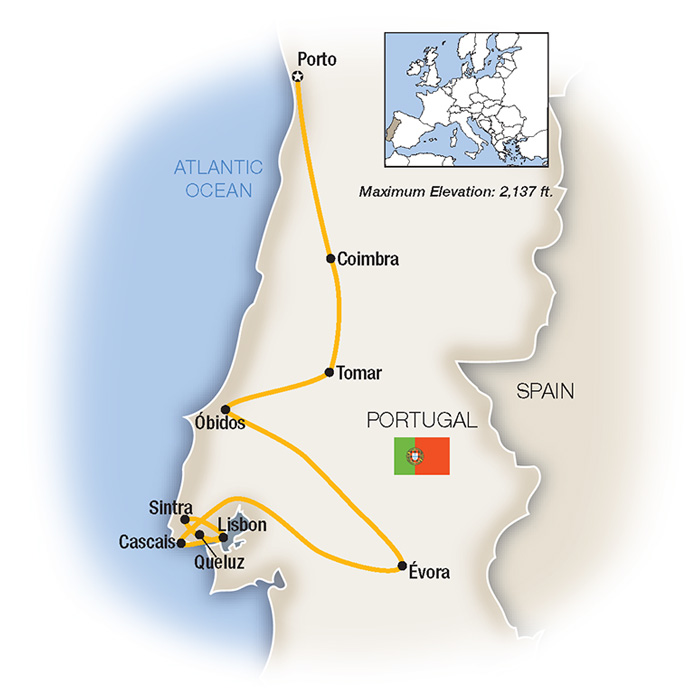 Our tour director was attentive and took great care of us.

An additional day in Lisbon would allow time to visit sites like Alfama and Rua Augusta not covered on the tour.

Dinner at the Queluz Palace, Porto boat ride, tile painting in Lisbon, all the sweets and treats we were surprised with daily, Fourth of July decorations in the bus.

This travel to Portugal was exactly what I was looking for.

Not too much big city, lots of interesting History and culture, Accommodations with comfort, class, and local flare! It would be hard to pick my favorite because I so enjoyed everything we saw.

Evora, with the Convento do Espinheiro Hotel.

The Knights templar history to the Palace for dinner outside Lisbon to our visit to the castle in Sintra.

I also enjoyed fellow travelers, fun tour guide, and felt all my senses were filled to great satisfaction!; ....less

This is the 5th tour Tauck had in this region.

Still a few kinks in the trip.

The one night stay in a northern town was way too quick.

A two night minimum would be best.

The food selections were only about 70% on target.

This may be Portugal or not.

Nonetheless not 100% as in our other Tauck trips.

The winery in Oporto.

A Week in Portugal

I've taken 9 trips with Tauck and this one was right up there with Italy and Ireland, my two favorites.

2nd-9th days: comprehensive coverage of muslim period, Knight Templars, Henry the Navigator, gilded cathedrals, special TOMAR: The monastery here holds much of Portuguese history within its walls - It began as an 8th C.

moorish fortress until taken by the Knight Templars in the 12th C.

, served as their monastery until bequeathed to the order of Christ in ca.

and began the Age of Exploration.

The itinerary was a great general overview of what Portugal is and has to offer.

Our Tour Director was well-organized, fun, and instructive.

The hotels were all top-notch.

The other guests congenial.

I wouldn't change a thing! Pena Palace in Sintra.

Queluz Palace for a private dinner.

The friendliness and helpfulness of the Portuguese people.

We loved the unexpected surprises from Tauck along the way.

Our tour guide was such fun and kept us engaged in the history of this beautiful country, our driver was so talented, and the hotels, wine, and food were excellent.

By far, the dinner in the Palacio de Queluz was extraordinary.

We enjoyed the grounds, had a group photo taken, and then were ushered into a grand room for dinner.

The chandeliers were amazing, food delightful, and the harpist playing during our multi-course dinner added to the experience.

A WEEK IN PORTUGAL

GOOD TRIP. DAY 2 TRIP TO VINEYARD WAS 5 HOUR ON BUS FOR TOUR OF VINEYARD. NOT WORTH THE RIDE. COULD HAVE GONE BY RIVER BOAT. ....more GOOD TRIP.

DAY 2 TRIP TO VINEYARD WAS 5 HOUR ON BUS FOR TOUR OF VINEYARD.

NOT WORTH THE RIDE.

COULD HAVE GONE BY RIVER BOAT.

AT VINEYARD WERE TOLD THE TEMP.

LUNCHES WERE MUCH TOO LARGE - BOTH FISH AND MEAT COURSES OFFER A LIGHT LUNCH.

SEEMED TO GO TO SMALL CITIES JUST TO GO THERE TOUR AND DINNER AT PALACIO DE QUELUZ.

NOTE - A JACKET NOT NEEDED IF YOU WANT A THOROUGH REVIEW DON'T LIMIT CHARACTERS!!; ....less

More like 3.5 stars—amazing sites and hotels, but not enough local flavor.

Though our leader was wonderful, we didn't get to know the local guides—often the highlight of other tours—who changed almost daily.

We saw beautiful sites and learned some fascinating history, but I wanted more local flavor I especially loved the almost-deserted Castle of the Moors.

Scaling the steep stone steps of its coliseum, I imagined the dangers of medieval times and the ghosts of bloody gladiators.

I savored the short time we had to wander there.

Hotels were upscale and comfortable.

Food and wine were very good.

Tour Director was friendly, well organized and knowledgeable about Portugal.

Tour may be challenging for those with mobility issues.

Driving through the Douro Valley, tour of the cork factory, tour of Evora, dinner at the Palace in Lisbon.

Stayed in beautiful hotels but they were not in town.

Without a warning that was a big disappointment because that is the main reason we go with Tauck-great hotels in the center of town.

While the food was great; it was too much.

Three hour lunches and three hour dinners were a waste of touring time The Pena Palace in Sintra.

St George's Castle (not on the tour but we took a cab to see it during free time in Lisbon) Consider putting it on the tour!! Consider showing a video or photos of the wine and olive processing.

Looking at empty/still machines is a little disappointing.

* All trip prices are displayed in the currency of the country you live in, some operators will accept payment in that currency, others may want payment in their local currency. At the payment stage the billing currency will be shown. Exchange rates are based on the date of the transaction.