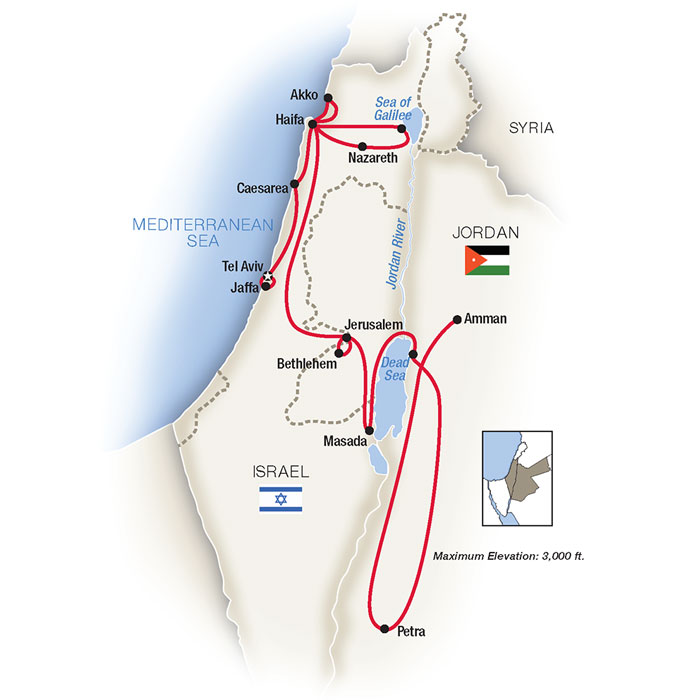 hotel was not particularly clean - toilets had to be flushed many times, drain in bathroom sink didn't work, had to call down for toilet paper, food was horrible.

Everyone were given a King bed-while we had two singles.

Lunches were the same boring meals day after day.

Too much emphasis on churches.

Being in Jerusalem, not going with the group to Church visits day after day, instead visiting the City on our own.

From the moment we landed until we left, all our needs were taken care of professionally.

Our guide went over and above to make the trip very memorable.

In addition to that, the local guides were very informative and professional.

The magnificent views from Masada, and being at the Western Wall are moments I will never forget.

No matter your belief you will be inspired by the guided tours through history and the development of this land and the peoples who inhabited it.

My wife and I were amazed to see the vast number sites that we read about and were related to our faith.

We felt comfortable and the peoples were friendly.

For us it was the religious site of the birth of Jesus.

I will add the Western Wall as well as "The Rock " the mosque in Jerusalem.

The whole trip was memorable; ....less

The guides were absolutely excellent, very knowledgeable and friendly.

The organization of the trip was outstanding even taking into account they had to change the schedule several times due to the presence of the president in Jerusalem and Bethlehem.

Petra was stunning,and worth the trip by itself.

Surprised, pleasantly so about Jordan in general and the ruins of Jerash in particular.

Israel and Jordon were excellent.

I had never been to Jordan, so it was all I hoped for.

The France trip was also excellent.

All escorts and guides were wonderful! All hotels were also wonderful! Petra; ....less

The days were full of activities, the hotels were top notch, and there was lots of good food.

I blogged the trip and took lots of pictures.

You can see what happened on our tour at http://www.

(2)Seeing the old city of Jerusalem (3)Our visit to Petra and the camel ride.

(4)The Bedouin dinner on the last day (5)The visit to the mosque and the synagogue ; ....less

Our tour leader was VERY knowledgeable and the tour guides in each location were terrific.

The hotels we stay at were top notch with great rooms and services.

It was one of the best trips we have ever taken and we would not hesitate to use Tauck again.

There were many- at the top of the list would be Jerusalem and Petra.

Accommodations were great and the tour guides were excellent.

They really knew their stuff! I especially enjoyed one in Jordon and one in Israel.

It was amazing how informative they were, especially without referring to any notes.

There were so many, particularly the spectacular scenery in the Rift Valley in Jordan, but the Farewell dinner with the local entertainment was definitely up there.

It was educational and memorable.

The tour leader gave us a sense of complete security in this environment.

We had excellent local guides at every stop and felt we were given a good understanding of the complicated history of the region, as well as the current political issues.

The entrance into Petra with view of the treasury was by far the most dramatic and beautiful moment.

Nothing in the world can compare.